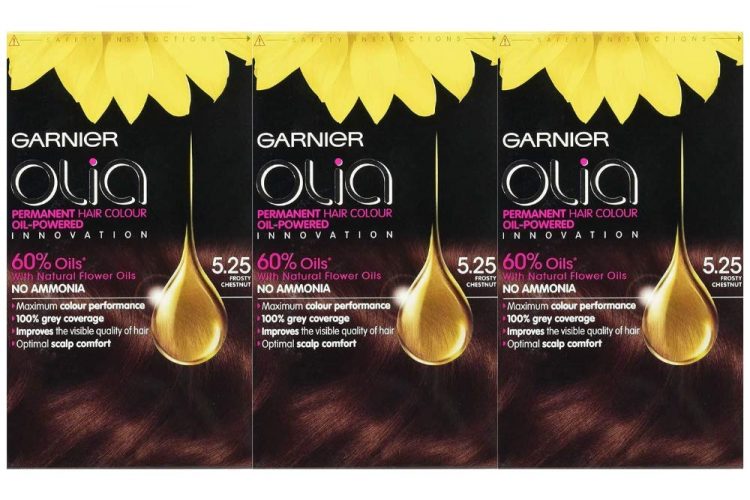 I saw this hair colourant on prominent display as it has only just been released, and as I’m always looking for something innovative, the idea of using a hair dye made without ammonia but with 60% natural oils appealed to me.

This particular dye has taken Garnier three years to develop and has twenty two patents pending, so it’s clearly very advanced, and at just under £7 a pack seems well-priced, too. The lack of ammonia, which can be damaging to your hair, is great news and the natural oils in this dye will be more nourishing than regular water-based alternatives, so it’s all looking good. The most prominent oil used in the colourant and developer isn’t flower-based at all, which is surprising when the packaging is emblazoned with a massive sunflower. It is, in fact, mineral oil – the flower oils are much further down in the ingredients listings. This is disappointing, but you have to bear in mind the damage dying your hair can do, so a more nourishing oil, even paraffinium liquidum, is better than nothing.

Garnier say that Olia will give you “maximum colour performance” and will “improve the visible quality of your hair” by making it potentially 17% shinier and up to 35% smoother. The application is “sensorial” – that’s not a word you use everyday! – and the formula is non-drip with a floral scent. I’m pleased to say the instruction leaflet is very clear. It helps that only one language is included. Application They describe two methods of application: the root touch-up and the all over colouring.  The shade I’m using here is 4.6 – Deep Red, which looks quite a bit darker than the previous dye I used: L‘Oréal Paris Sublime Mousse Permanent Foam Colour – 740 Flaming Copper and is actually the shade Garnier are using in a lot of their advertising for Olia, as it’s such a bold, fabulous looking colour. When you open the box the containers are pretty big, but there’s not a huge amount of developer and colourant, and infuriatingly I found that there wasn’t enough formula to cover my hair!

With every other hair dye kit I normally have some product left over, but to actually run out of dye is something that hasn’t happened in over a decade of home hair dying, and now I’m left with small patches of hair at the back of my head which are the old colour! This stinginess simply isn’t good enough. It doesn’t help that the rather thick consistency means it’s more difficult to spread through your hair, unless it’s very fine. The applicator bottle is also very disappointing, as it’s shaped like a droplet (to represent a drop of oil, I presume) so while it looks quite stylish, it’s very difficult to hold when it gets wet, and this makes application too troublesome. Style over substance springs to mind. Garnier are true to their word regarding the fragrance – there really is no eye-watering ammonia smell. It smells floral, but even this isn’t overpoweringly fragrant. The dye went very orange when developing on my hair, which did worry me a bit – I had horrible visions of looking like Vivienne Westwood! Thankfully when I started to rinse off after thirty minutes I found my hair was quite a bit darker (and pinker) than the dye itself.

Unfortunately, this is without doubt the most hard to rinse hair dye I have ever used. I must have spent a good ten minutes drenching my hair in water in an effort to remove the colourant. Even after conditioning and rinsing some more I was still squeezing dye from my hair. I actually gave up in the end when the water was tinged with just a little orange. Yes, my hair is fairly long and quite thick, and yes the colour I’ve chosen is a particularly intense shade of red, but there are limits to what I’m willing to put up with. Fifteen minutes of non-stop rinsing shouldn’t be necessary. You do get more conditioner than some other hair dyes in this price bracket, so it’s good for about three uses for long-haired people, and it’s nicely nourishing. It’s not as slick as some conditioners, but then my hair didn’t feel particularly dry after dying it, so it doesn’t need to be. The gloves aren’t great, to be honest; they’re certainly big enough but they’re thin and feel like black bin liners.

This dye really does leave me feeling conflicted. On the one hand it’s ammonia-free, which I appreciate. It doesn’t have that dreadful smell that most dyes suffer from, and it’s genuinely kinder to your hair. The plant oils (and mineral oil) have left my hair feeling softer and it looks nice and shiny. The colour is bold and mostly even but does lack the natural tones and highlights of the very best dyes. If Garnier can improve the applicator bottle design, include quite a bit more formula and make the intense colours easier to rinse out then I’d highly recommend this dye to everyone (even though it’s not one of the great new foaming dyes!). As it is, even with the benefit of being ammonia-free and nourishing, there are just too many compromises. It’s not even good value if you have to buy two boxes for longer hair. A disappointing kit.

What's new in Fashion is always being my curiosity, from cool funky dresses, accessories and celebrity outlook to latest hairstyling, makeup and beauty & skin care tips, I am always ready to know what’s happening in Fashion industry and feel free to share.